Calvary Women’s Services Participates in “Housing for All” Rally

Hundreds of people from around Washington gathered in a church in Chinatown on Feb. 7 in support of a pressing need: affordable housing for all DC residents. Residents, staff, donors and volunteers from Calvary Women’s Services were among the many who attended the “Housing for All” rally organized by the Coalition for Nonprofit Housing & Economic Development (CNHED). 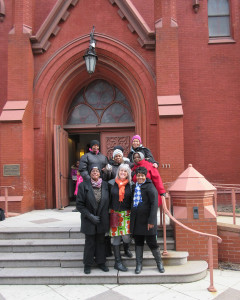 The Housing for All campaign was established by CNHED under the belief that “all District residents deserve decent, quality housing at a price they can afford.”

Throughout the rally, multiple speakers reiterated the need for the city to commit at least $100 million for the Housing Production Trust Fund each year. This funding will help develop new affordable housing units and preserve existing housing. Calvary Women’s Services is one of many groups and community organizations that signed a letter expressing strong support for this annual investment.

DC Mayor Muriel Bowser addressed the crowd and spoke about her administration’s goals for providing affordable housing options to DC residents and ending homelessness in the city. “We need a DC that is affordable for all Washingtonians,” she said.

DC Mayor Muriel Bowser (center) with CNHED’s Susanne Slater (left)
and Stephen Glaude (right) at the “Housing for All” Rally.

Two DC councilmembers at-large, Anita Bonds and Elissa Silverman, also spoke at the rally. Ms. Bonds serves as chairwoman of the DC Committee on Housing & Development, and Ms. Silverman is a member of the same committee. Both women spoke passionately about the housing crisis as an issue that impacts everyone. 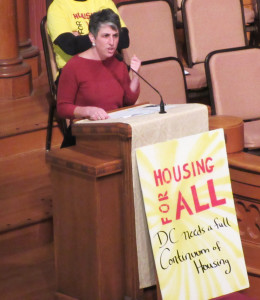 DC councilwoman at-large Elissa Silverman said
affordable housing is not a gift, but a responsibility.

Individuals who have experienced the ups and downs of living in Washington, DC shared their personal stories during the rally. Many spoke about the immense challenges of homelessness, chronic illness, debt and poverty. These speakers were now living in transitional housing, renting an apartment or making payments on their first home. The joy and sense of security that they expressed sent the strongest messages of the day.

In early December, the Calvary community gathered to cut the ribbon on its newest program, New Foundations. The program will provide housing and comprehensive support services to 18 women who are exp…
Homelessness Read Post