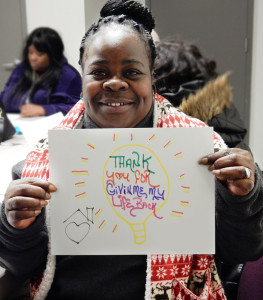 Theresa has been through the toughest crises that life could throw at her, including living on the streets of DC for more than a year and being taken advantage of both emotionally and financially by an abusive husband. She said that before she came to Calvary Women’s Services, she was unaware of the resources that are out there for homeless women.

“I found balance at Calvary,” Theresa said. “I finally had an established address and I started taking medication for my mental illness.”

In addition to overcoming homelessness and managing her mental illness, Theresa also had to confront the challenges of finding employment after being incarcerated. Although she had taken classes to earn an associate’s degree, it was a struggle for her to secure a job due to her past. But under DC’s recently passed “ban the box” legislation, employers are prohibited from asking certain questions or making accusations about an individual’s criminal record.

Theresa’s reentry into society is the subject of a short online film called “Life in Transition: A Year After D.C. Bans the Box.” Last month Theresa organized a public viewing of the film and a panel discussion. The purpose of the event was to introduce women in the area to some of the resources that are available, including the resources that Theresa found at Calvary. Proceeds from the event supported makeovers for five women who are in transition and looking for a job.

Now Theresa works at a shelter for women and children who have survived some of the same experiences that she faced, including domestic violence. She said her job is so rewarding because “I went through the same emotions that they’re dealing with.”

One of Calvary’s core values is excellence. For us, this means providing the best housing, health, education and workforce programs to every woman, every day. It is a big task, but one our staff re…
Employment Read Post