Casie’s Story: “At Calvary, I learned that I matter.” 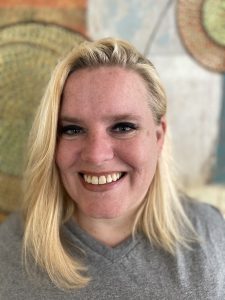 Calvary provided a space for Casie to heal and to learn that she mattered. “I knew I would not be successful if I didn’t do the hard work to fix past traumas.” Arriving at Calvary, Casie was ready to do the hard work to move forward. When reflecting on her time at Calvary, Casie believes that while becoming homeless was the worst thing that ever happened to her, finding Calvary was one of the best.

It was not always easy, but through working with Calvary’s therapist and participating in Calvary’s Life Skills, Education, and Arts Program (LEAP), she found community and improved her self-esteem.

Casie was a dedicated participant in LEAP classes, including art, meditation, yoga, geopolitics, and civics. “I hated meditation at first but continued to sign up for it because it was like group therapy, and eventually I learned how to stop fidgeting.” Through these classes, Casie learned to express herself and found the confidence to know that she matters and that her voice was worth hearing.

Peer support and sisterhood are vital parts of Calvary’s proven model to empower women to end their homelessness. Casie met some lifelong friends that have supported her as she moves into her own home and starts a new job.

“Now, I appreciate myself and have more self-worth than ever before. I feel prepared to be successful on my own because I have developed these skills. Calvary gives you the grace to make mistakes and is there to help pull yourself back up.”

In early December, the Calvary community gathered to cut the ribbon on its newest program, New Foundations. The program will provide housing and comprehensive support services to 18 women who are exp…
Homelessness Read Post

Candace McLaren Lanham was elected President of the Calvary Women’s Services Board of Directors in October, after three years on the Governance Committee. Candace will join the new administration i…
Calvary Board Read Post
You can empower women and help them out of homelessness today. Donate Now